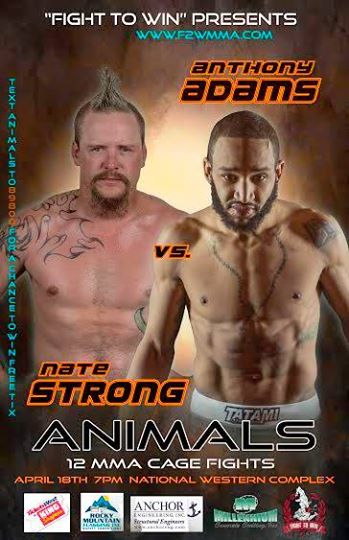 Anthony Adams Steps in to Fight to win Animals Card on 4 days notice!

Anthony Adams (2-1, Team Wildman/Black Dragon MMA/The Farm Brazilian Jiu Jitsu), perhaps more than most, knows how grueling fight preparation can be and how unfulfilled doing all of that work with no payoff feels. That’s why he’s willing to make sure that debuting fighter Nate Strong (0-0, Salvation MMA) won’t feel left out on April 18 at ANIMALS.

While Adams is stepping to replace Strong’s opponent on less than a week’s notice, it isn’t like he’s been jumping off the couch to be his dance partner. Adams has been ready for a fight for months.

“Well, in the past few months I had two guys bail on me last minute. Last week I was scheduled to fight at RFA 14. The guy came to weigh-ins but never showed for the fight,” Adams said.

With a letdown like that who would have blamed Adams for simply eating himself into a coma and right back out of fight shape? Instead Adams stayed focused and when the call came from F2W, he was ready to answer.

“I’m in shape, weight is right where it needs to be so why not?” Adams said in response to the fight offer.

Fans may have started to notice the name Anthony Adams popping up more and more. He seems to be ready to go at a moment’s notice and is becoming one of the go-to fighters for promoters. He attributes his exuberance that’s come about since late 2013 to a desire to find focus within this sport.

“I’m just trying to gain as much experience as possible. I’m in no rush to go pro though. For now, I’m just a student of the game. A developing and evolving fighter,” he said.

With two of his fights having already gone the distance, Adams is becoming a skilled ring warrior and he thinks that experience may well play the difference in taking on a debuting fighter.

“I’m not looking past Nate. I take all of my opponents seriously. But I do think the experience factor plays a part, definitely in the later rounds,” Adams said.

As for his feelings on taking a fight on such short notice, he sounds more excited than nervous.

“There is no pressure on me. I learned in my last fight, just go out and have fun. This is going to be a fun night!” Adams exclaimed.

And if fun is what the fans are looking for on April 18, then Adams has a few choice words for what he thinks fans should expect of his and Strong’s fight.

Adams is stepping in on very short notice after a very long camp for his last fight. Will his experience, training and focus be the deciding factor in this match or will Strong’s steady dedication to this fight bring him an impressive debut win? The only way to find out, is to be there live.