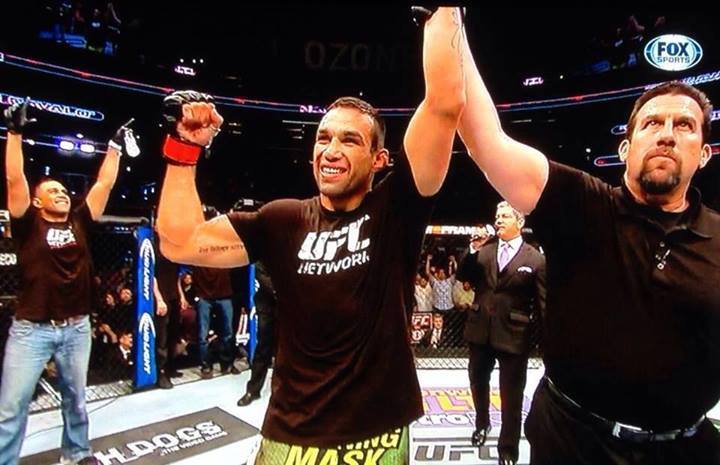 ORLANDO FL – Fabricio Werdum was counted out by many against Travis Browne well before the fight began, and he spent 25 minutes proving a lot of people all kinds of wrong.

Werdum looked dominant against Browne and finally punched his ticket to a heavyweight title shot against champion Cain Velasquez. Werdum took a pair of 50-45 scores and a 49-46.

The heavyweight bout was the main event of today’s UFC on FOX 11 event at Amway Center in Orlando, Fla. It aired on FOX following prelims on FOX Sports 1 and UFC Fight Pass.

In many ways, Werdum made it look almost easy. That’s not to say Browne was without offense of his own. In fact, many times throughout the fight, each fighter could be seen almost breathing sighs of relief that they were able to just step out of the way of a crazy kick or powerful punch.

But by the end of the fight, Browne’s face was a bloody mess, and Werdum looked as if he could go to the 10th round if he had to after pulling off the upset as a 2-to-1 underdog.

Fighting for the first time since June 2013, Werdum spent the fight peppering away at Browne and either walking through or just avoiding the Hawaiian’s biggest offense. And while Browne remained a near-constant threat, Werdum seldom looked too concerned.

Browne took the center of the cage and kicked high in the first 30 seconds, just missing. But after he ducked away from a Werdum punch, he went for a Thai clinch looking to end the fight in a hurry with knees. Seconds later, he had Werdum on the canvas and was raining down punches. But the Brazilian survived the onslaught, and was able to get back to his feet, then go low to drive Browne to the canvas – the first time Browne had been taken down in his UFC career.

And that seemed to set the pace from there on out. Werdum would put Browne on his back more later, scoring points and keeping away from the danger Browne presents on the feet.

On top in half-guard in the first, Werdum looked for short shots as Browne covered up. But Browne worked his way back to his feet after a minute and didn’t look much worse for the wear. He just missed a massive right uppercut, then ate a kick to the ribs. And with that kick, he slapped his side, letting Werdum know he didn’t bother him. That caused the Brazilian to rush forward, seemingly perturbed. And moments later, Werdum was in the same situation – a spinning back kick landed to the side of his head, and he told Browne it didn’t hurt. The two slugged at each other, each just missing the type of punches and kicks that would have ended many fights. But they saw a second round.

Then a third, fourth and fifth. And with each passing five minutes, Werdum looked a little more confident – as well he should. Midway through the fight, he had landed three times as many strikes as his taller opponent.

Browne needed to go into desperation mode in the fifth, down four rounds from a pair of judges with the only way to a win being a finish. But a finish was nowhere to be found, and Werdum was into a heavyweight title fight expected to take place this November in Mexico against Velasquez.