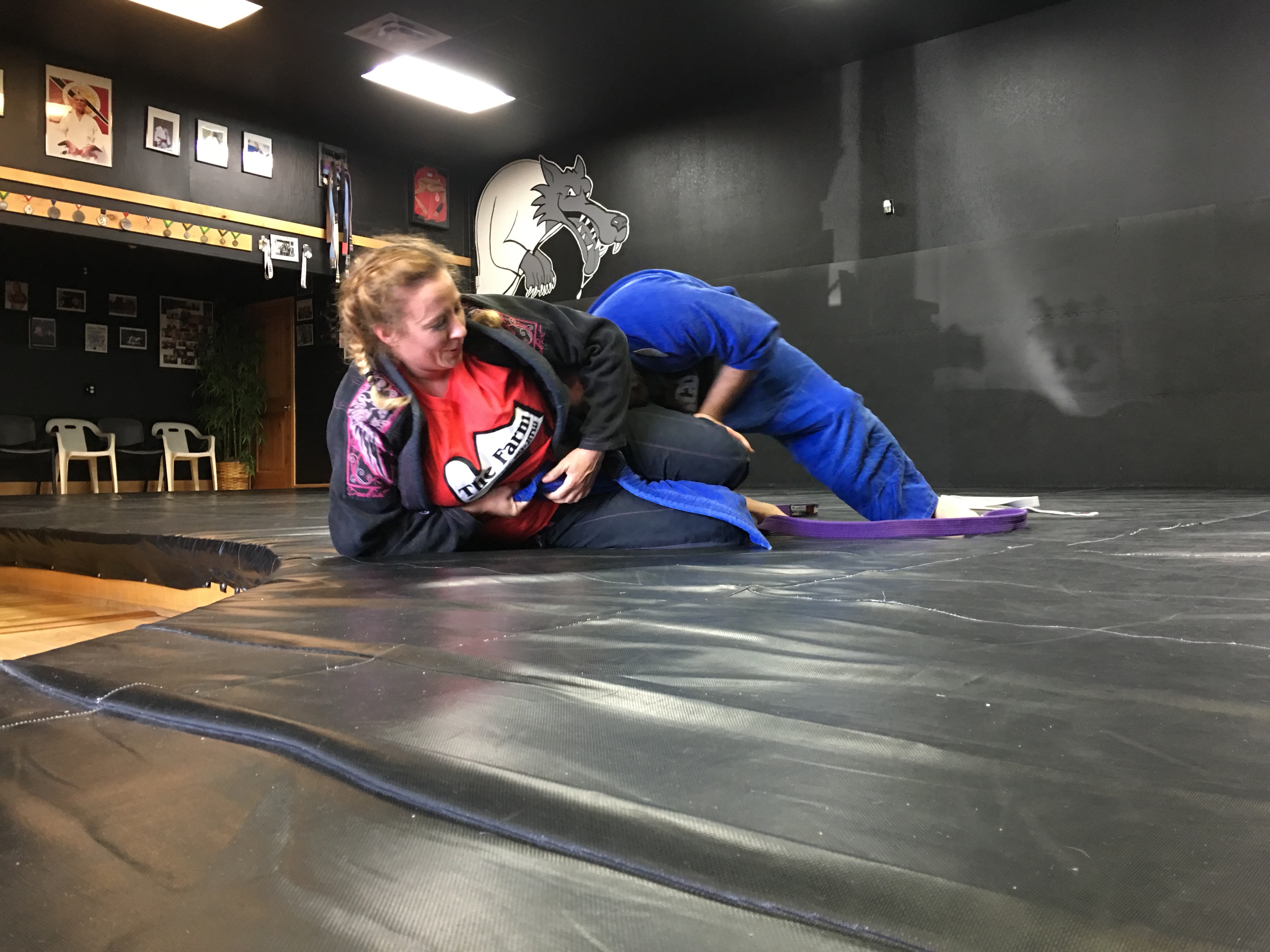 By: Valerie Worthington
       
When I was first starting out in Brazilian jiu jitsu, I experienced an internal struggle every day I went to train. On one hand, I was stupid crazy about training. I loved what I was learning and simply disappearing into the focus, the experience, and the challenges. But on the other hand, the anticipation of going into class, feeling intimidated and small because I was new and awful at it, and having to contend with a roomful of complete strangers, was sometimes almost too much to get past. I would sit in the parking lot before class every night, shoring up my confidence and psyching myself up to go inside.

beginner bjj, beginning bjj, starting bjj, brazilian jiu jitsu, bjj community of course I was always glad I did, but it was an uphill battle, every single time. Part of the challenge was the feeling of benign neglect I sensed from the group. No one was ever mean, but nor were they anything much more than non-committal and detached. I recall being squarely on the outside looking in. Everyone was cordial enough but would quickly extricate themselves from conversations with me and gravitate toward their friends at the first opportunity. I remember wistfully observing how the old-timers – and to me, anyone who had been training for longer than six months was an old-timer – joked, drilled, and shot the breeze together.

I could give you some song and dance about how learning communities matter and how I knew my progress would be positively influenced by being more a part of this one, etc., etc. As a learning theorist, I honestly believe this to be true, generally speaking. But the fact is, at the time, I didn’t give a crap about learning theory. I just wanted to belong. I imagine this is one of the things many people who start a martial art, sign up for CrossFit, join an intramural sports team, or take a lesson are looking for: a sense of belonging and community. A team.

At the time, I didn’t realize the dynamic at work. I figured my natural ability to be friendly and a decent conversationalist would help me make inroads, but no such luck. For months, I would go to class, do my thing with the person who was unfortunate enough to end up being my partner, and then be gently relegated back to wallflower status.

Oh so slowly over time, things began to change. People started to learn my name. I became less of a pariah as a training partner. I attended the end-of-the-year party and some MMA events, tournaments, and Golden Gloves competitions that enabled me to interact with people away from the academy. Importantly, these things also demonstrated something to the other students: I wasn’t going anywhere.

beginner bjj, beginning bjj, starting bjj, brazilian jiu jitsu, bjj communityNow that I have the perspective of the old-timer rather than the newbie, I understand the tendency toward waiting and seeing with new students. It may not be the easiest for the new person, but I get it, because the fact is that for every student who persists in BJJ there will be five to ten who show up for a couple months and then bail. After I had been accepted to a degree, I resolved to reach out to newbies, actively befriending them and making a point of learning their names, for instance.

But then, far more often than not, these people disappeared after a few months, leaving me wondering what had happened and realizing I was taking it personally though it wasn’t personal. It just turns out the BJJ bug does not bite everyone as hard as it did me and other people who stick it out. There are plenty of people who try it on for size and find it kind of cool but not so cool that it displaces their other obligations. And this is fine for those people, but, when your time and energy are limited, you make sometimes harsh-seeming decisions about how to expend them. It sounds heartless, but it’s actually self-preserving. It’s tough to justify investing in someone’s progress or in befriending them if they aren’t going to stick around so everyone can reap the benefits. It isn’t until a newbie has demonstrated s/he is there to stay that the rest of us are likely to start taking notice. Like I said, it’s nothing personal. In fact, it takes time for it to become personal.

This may be cold comfort for you if you are a two-monther and want to become part of the group. You may know in your heart of hearts that you are a good risk, but the rest of us are going to make you prove it. I’m not saying it’s right. But it is a reality. Read on for some observations about how to do so effectively. 1. When it comes to technique, be seen and not heard.

It doesn’t matter how many YouTube videos or instructionals you have watched. The painful truth is nobody is interested in your opinion about the movement pattern we are drilling or your suggestion about how to make the coach’s teaching better. Offering it will not endear you to the higher belts in any way. At best, they will be amused, and at worst, they will be irritated. Offering your unsolicited opinion is rude and disrespectful. You may not intend it that way, but that is how it will come across. And since you are new, chances are you will get something wrong in the translation, if you say anything. (But you won’t, right? Because now you know better.) Remember that if you knew what you were talking about, you wouldn’t be new. So, in this case, as my hero Judge Judy would say, you have two ears and one mouth for a reason.

2. Remember that, by definition, you are not very good at actually doing BJJ.

You are a white belt, which signifies your level of knowledge and ability – low. You are not going to beat anyone, and it is annoying when you try. Yes, BJJ is a martial art, but your goal at this point is to learn as much as you can. If you are doing it right, you will be tapping all the time, not trying desperately to collect submissions yourself. Entering a training situation hell-bent on winning runs counter to your goal of being accepted, as does going full spaz to keep from having to tap to someone else.

3. For the time being, just deal with the fact that everyone’s is bigger than yours – including hers.

beginner bjj, beginning bjj, starting bjj, brazilian jiu jitsu, bjj communityMuch of the reason we try so hard to win when we are beginners is because we hate the fact that we can’t. But you have to be okay being low (wo)man on the totem pole. Do not case the joint looking for an easy target. Chances are, the “lame” ones you try to separate from the herd will kick your ass, even the ones with lady parts. They may even be the best at doing so. There is truly no escape from the ego pounding, and embracing that fact will gain you more respect and more positive attention than a refusal to acknowledge reality. Newbie ladies: I’m looking at you too, not just the gents. Take your lumps like a wo/man, and you’ll win friends and influence people. In addition, show the higher belts the respect the system affords them: move out of the way if you and your partner bump into another pair, wait to be chosen instead of grabbing someone, and the like.

Don’t force things. Your opportunities to socialize with your teammates will present themselves. I promise. Take advantage of these, but don’t horn in, especially not in the beginning. If you try too hard, you’ll come across as forcing what will eventually happen naturally, if you give it enough time.

If you are at the beginning of your BJJ journey, what I’m saying may sound harsh, and it may be different from other athletic situations. Rest assured – or be forewarned – that if you stay the course and focus on the learning, you will increase the likelihood that you will crack the code, and then BJJ will become the practically physics-defying time suck it is for the rest of us. You, too, will find yourself spending greater and greater proportions of your days training, thinking about training, joking about training, and spending more time with people who enjoy training. In other words, be careful what you wish for.

Do my remarks resonate with you, either on the receiving or the delivering end? Post your observations to comments.