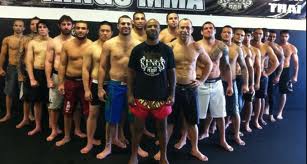 These fighters—along with numerous other big names—are known for their incredible abilities in the cage.

More specifically, they’re known for having a highly-developed stand-up game.

The Muay Thai skills of guys like Anderson Silva and Wanderlei Silva are the stuff of legend. Kicks, knees, elbows, and that overpowering clinch are all major factors that their opponents must consider.

Much of those skills are owed to one man—and that man is coming here to share his knowledge. Born in Curitiba, Brazil in 1973, Rafael “Master” Cordeiro has been competing and coaching in Muay Thai and Mixed Martial Arts events for 25 years; dating back to before he helped start the Chute Boxe Academy in Brazil.

From there he went on to become the Brazilian Muay Thai champion in addition to capturing the International Vale Tudo lightweight championship.

When he retired from professional competition, he went into coaching full time for Chute Boxe, which produced the fighters named above and countless others. In 2009, Master Cordeiro left Chute Boxe to found Kings MMA in Huntington Beach, California, where he currently trains an elite crop of fighters that any gym would be clamoring to get their hands on.

Despite being an impressive fighter in the cage, what makes The Mestre so truly unique is his gift of coaching—a gift that he will be bringing to The Farm Bjj on May 4th.

Some men are born fighters and some are great teachers, but rarely do the stars align so that one person is blessed with the ability to do both at the highest of levels. In Rafael Cordeiro we see that exact combination and could not be happier in welcoming him to Greeley, Colorado to put on a Muay Thai seminar at The Farm Bjj.

If you are new to the sport of Mixed Martial Arts or a seasoned veteran, I can guarantee there will be something here for you. Muay Thai, along with wrestling, boxing, and Brazilian jiu jitsu, has become a cornerstone of modern MMA—and this seminar will provide you a few hours with one of the greatest Muay Thai coaches in the world.

Kicks, knees, elbows, more knees, the clinch, and more knees are sure to be in abundance when Master Cordeiro takes the floor on May 4th.

You need to be there.

Call 970-978-4996 to reserve a spot for a seminar that promises to be one of the best learning experiences a fighter can have. If you want to improve your stand up game, you need to be here.

If you want to have a better understanding of Muay Thai, you need to be here.

If you want to be a fighter… You definitely need to be here on May 4th.

You don’t want to miss this one.